Standish Voice is a group of local people who are working to ensure Standish is a great place in which to live and work. 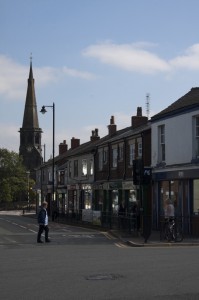 everyone who lives and works here.

After our own consultation, an EGM of Standish Voice members agreed to support the Final Draft Plan. Wigan Council carried out a round of statutory consultation and then a Planning Examiner reviewed the plan and asked for modifications before the Final Plan was completed.

You can read the plan here. You can read all its associated documentation by clicking on the link here or by accessing the Neighbourhood Plan pages on this site.

To use an interactive tool which can explain the highlights of the plan, click here

See more information about the Neighbourhood Plan in its own section on this website.

We also want to be a positive voice for Standish and help to bring the community closer together by organising and publicising local activities, events and campaigns.

Together we can make Standish a place to be proud of!

The Forum and Area was re-designated for another five years, beginning in 2020 and ending on May 14, 2025. You can read the documents relating to this here

Please join us and speak up for Standish. To register your interest please click here to sign up to be a member of Standish Voice, which is free of charge, to receive regular updates – or keep in touch via Facebook and Twitter.

Wigan Council has scrapped its plans to widen one of the main roads into Standish.
Wigan’s ruling Cabinet committee agreed with their officers who recommend that the scheme, which would have cost at least £1.6m, should not go ahead due to huge opposition and because it would swallow up money that could be spent on other initiatives.
Standish residents were consulted on a number of projects in Spring 2021 and there was widespread opposition to the road widening plans.
The Cabinet agreed to road and footpath improvements, including upgrading some of Standish’s footpaths and bridlepaths so they are better for cyclists and walkers – after the success of the upgrade of The Line.
Also, the zebra crossing on Market Street will become a puffin crossing to link with the changes of the crossroads lights to reduce queuing, better traffic lights at Red Rock bridge to reduce congestion, and installing traffic lights with pedestrian options at the railway bridge on Bradley Lane to improve safety.
Around £1m will be held back from developers’ infrastructure funding contributions for new schemes in Standish to come forward. We hope our proposals to improve the village centre and its conservation area can be progressed.
A spokesperson for Standish Voice said: “We are pleased and relieved that this flawed scheme has been dropped. Standish Voice Neighbourhood Forum, all three Standish councillors, and the vast majority of residents who took part in the consultation were against this proposal, which would have been a waste of £1.6m-plus and only made congestion worse in the long run.
“We are grateful that Wigan Council has acknowledged the huge opposition to this scheme and the democratic will of their own consultation is reflected in this decision.
“The road widening would have had a minimal impact on existing travel times but it would have encouraged more through traffic and increased the likelihood of further housebuilding on Standish’s green fields, while ruining one entrance to the village.
“In May’s local election, all candidates in the poll expressed their opposition to the scheme and we have been lobbying Wigan Council, its officers and councillors, long and hard to urge them to dismiss this plan, ever since it was first suggested.
“We will now work with Wigan Council to progress the other infrastructure improvements that will go ahead and also press our plans for much-needed improvements to Standish conservation area which would make it a more attractive place to visit, shop in and work in. We want our village centre to largely benefit people and not just cars.
“We would like to thank everyone in Standish who supported our campaign, including taking part in the consultation and signing our petition, to prevent the widening of School Lane.”
You can read the Wigan Council article about this here, with a link to the report to Cabinet.

Standish’s Coronavirus support scheme, which has helped vulnerable people isolating in their homes for the past 18 months, has been wound down.

Standish Coronavirus Help (SCH) was running since the first weekend of the lockdown when Standish Voice and the village’s three councillors – Adam Marsh, Debbie Parkinson and Ray Whittingham – formed the organisation to support those who did not want to leave their homes due to being severely at risk from COVID-19.

The group quickly assembled an army of volunteers from across Standish – with around 140 signed up to help their neighbours and ran a successful crowdfunder campaign which, combined with a grant from Wigan Council, paid for the running of the scheme.

During the year and a half, hundreds of shopping payments have gone through SCH’s books and many other small acts of kindness have been arranged, from medicine pick-ups and drop-offs, helpers calling round just for a chat with those who could not leave their homes, and tradesmen being arranged for work to be carried out – sometimes free of charge.

SCH also arranged for the people it looked after to receive gifts of tulips in spring and poinsettias at Christmas and organised a festive hot meal for them in a partnership with a local pub. Food parcels were also sent round at the start of the pandemic and a 24-hour, 7 day a week helpline – manned free of charge by Standish company SMARTstrat – was set up so people could ring with problems.

The last people being helped through the scheme have now organised shopping to be dropped off in private arrangements, but the group stresses that it can restart its activities if lockdowns are ordered again.

A spokesman said: “Standish Coronavirus Help has been a hugely successful operation, with many hundreds of shopping trips being carried out for the vulnerable in our village and delivered by kind-hearted people in their community.

“We have had a rollercoaster ride organising it with highs of the wonderful feedback from those we have helped to the despair of having some of those people pass away during that time.

“The scheme has been something positive and uplifting out of a situation that was obviously terribly depressing and challenging for everyone.

“We would like to thank the many volunteers across Standish – some of whom were not called upon – who came forward to help those in need. We are incredibly grateful, too, to SMARTstrat, which has operated the helpline at its own expense for a year and a half – it was a lifeline to many people.

“Lots of people have been involved in organising the support group but it was successfully led by Councillor Adam Marsh and Standish Voice Treasurer Karen Bliss must be thanked for processing hundreds of payments which went from those we helped, through us and on to the volunteers for shopping trips – which kept everyone safe from anything untoward.

“Standish Coronavirus Help has been wound down but can spring back up again if needed in the future – and many of the friendships built up across the community will last for a lifetime.”

Standish Voice committee meetings are usually held monthly, typically on the third or sometimes the fourth Tuesday of the month at 7.45pm, in a private room at Alberts restaurant, on School Lane. All people who live or work in Standish are welcome to attend.

Sometimes a Zoom meeting is called and, if this is the case, the information on this will be published here. Our next meeting is on Tuesday, July 19th.

Standish Christmas Market is back! The free-to-attend event will be held on Saturday 3rd December at Market Place and surrounding areas. The online event runs from Friday 2nd December to Sunday the 4th.
This year, we are adding Standish Community Centre to the indoor stall areas, alongside St Wilfrid’s Parish Hall and the Standish Methodist Church Hall, in our commitment to make the Market bigger and better after two years of it being postponed due to COVID-19.
If you would like to apply for a stall, simply click the appropriate link below and complete the online form.
Indoor here.
Outdoor here.
Hot Food here.