When Standish Voice became a Neighbourhood Forum in 2015, Wigan Council asked us what single, short-term project could be achieved in Standish in partnership with them.

We said an improvement to The Line – the former single-track mineral line railway which ran from Robin Hill pit near Almond Brook Road to the Coal Wash at Gidlow. 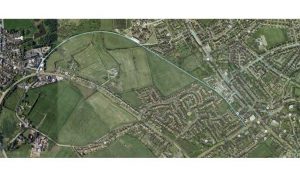 The Line, highlighted in this aerial view, was a muddy if scenic track which ran from Brookfield Road past Standish High School to the centre of Standish at Preston Road.

There have been many other examples of using former railway lines for non-car routes across the country and Standish Voice believed an upgrade of The Line would be popular for recreational users but also people from the north of Standish who wanted to access Standish centre and children going too and from Standish High School.

We also believed that putting in place an upgraded route was needed before the housing developments in the north of Standish were built, so new residents would get into the habit of using The Line to access Standish, instead of using their cars. This would help to limit the increase in congestion in the centre of the village.

Wigan Council agreed to this and the type of multi-use path was discussed and agreed. Wigan Council found a contractor to do the work and after lengthy delays due to legal issues and discussions with private landowners, the work began in spring of 2018. The work was completed on schedule in late summer 2018 in time for the new school year.

We are really pleased with the finished route and have had tremendous feedback from the public about it.

You can get updates on the project, including on bins, law enforcement, dog fouling and landscaping on the council’s website by clicking here.

Below are before and after photos of The Line, including a photo of Standish Voice chair Gill Foster and vice chair Paul Ogden with Wigan Council leader David Molyneaux at the official opening of Standish Cycleway. 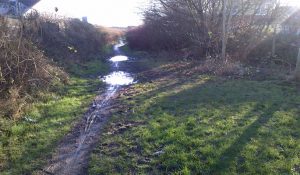 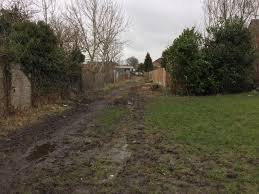 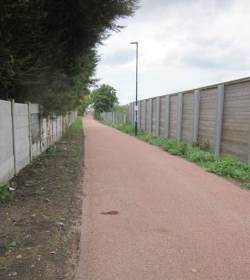 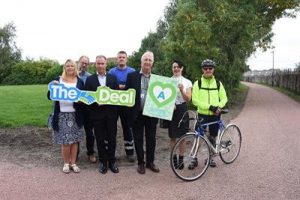