In January 2016, we conducted a month-long campaign for better public parking in the centre of the village.

For a number of months we had received complaints from business and residents that tighter restrictions had made the lack of public parking worse in Standish.

We organised a petition, which gathered 1,300 names in only a few weeks and presented Wigan Council with a report, a parking survey and a parking study, which concluded that Standish ideally needed about 130 extra public parking spaces. 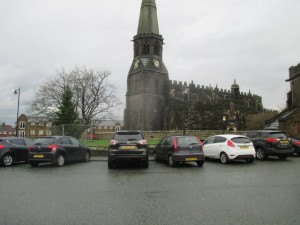 Wigan Council quickly agreed a package of measures with Standish Voice to combat this growing problem.

We will be working with the council, private car park owners and Standish businesses over the coming months to tackle this issue.

1.     Set up a Parking Subgroup with Standish Voice.

2.     Assist Standish Voice to identify clear and measurable parking objectives to include in their Neighbourhood Plan.

3.     Commission Transport for Greater Manchester to undertake a parking survey in Standish town centre to identify parking habits and usage.

5.      Work with Standish Voice to develop a Community Parking Scheme opening up areas of private parking to the community.

6.     Develop Sustainable Travel options to access Standish town centre to link with the cycle and pedestrian improvements to the mineral line and other improved walking/cycling routes.

7.     Introduce measures such as pedestrian/cycle signage and cycle parking, along with Travel Planning advice to complement the sustainable travel options.

8.     Undertake an assessment of on street parking restrictions and time limited waiting areas.

11.   Work with Standish Voice to identify and explore individual sites with a view to creating additional public parking spaces in Standish and commit resources to achieve this.

12.   Commit resources to assist Standish Voice to develop and deliver their parking plan and aspirations for Standish.

Parking in Standish has been an issue for a number of years, but recently that problem has become much more acute.

Our parking survey, in this report, suggests there is a deficit of 129 parking spaces for the general public to access in Standish centre.

Action needs to be taken to increase the number of spaces the public can use to allow shoppers and business users to park more easily, for residents of nearby streets to leave vehicles outside their own homes, and to give the impression to the wider community that Standish is ‘open for business’ as an attractive trading centre. More parking would also ease traffic congestion.

During the latter part of 2015, Standish Voice was approached by a number of shop and business owners in the centre and residents on Collingwood Street, a residential, terraced street in the centre of the village. All complained about the lack of car parking spaces across Standish since Aldi, which owns the biggest single car park in the centre, increased and enforced its car parking restrictions. 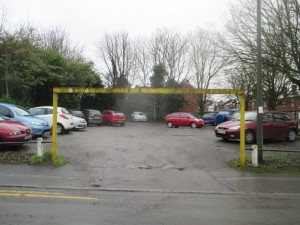 This change of policy on Aldi’s behalf, from one of allowing 2.5 to 3 hours of parking on its car park to 1.5 hours, seems to have had a ‘knock on’ effect across the village. In January 2016, SPAR announced that it had suffered more unauthorised use of its car park and policing measures would have to be put into place.

This ‘arms race’ of increased restrictions, the problems it was causing, and anecdotal evidence that suggested some shoppers were not even coming into Standish to this issue, prompted us to launch our campaign for more public car parking in the village.

In general discussions with Wigan Council officers about Standish Voice’s creation of a Neighbourhood Plan, we felt there was a lack of awareness of the parking problem. This can be evidenced in Standish Infrastructure Assessment (SIA) – the 2013 document which details infrastructure provision needed for Standish to cope with new house building in the village – as no problem with parking was identified in it, and so no ‘106 agreement’ funds allocated to solving the issue.

This may have been the result of a Wigan Council survey in October 2006, which focussed on how existing public parking spaces were performing and concluded that there was no need for more public parking provision. However, this survey did not take into account the ‘hidden’ number of people who avoided the village centre due to a perceived lack of parking. The reason could also be that SIA was not compiled after consultation with the Standish community.

The results of Standish Voice’s Neighbourhood Plan consultation – which was carried out in summer 2015 and elicited 783 responses  – clearly shows that the lack of parking is a concern to residents.

In the survey, Standish Voice asked a series of questions about improvements to Standish centre. We asked: ‘What would make you use the centre of Standish more often (circle one or more)’ with the suggestions of: more parking; more shops; more restaurants; more pubs/bars; a park. The options for answers were: strongly agree; agree; no view; disagree; strongly disagree.

We also asked: ‘To ease traffic congestion in the centre of Standish, there should be (tick one or more)’. The responses were: more parking, 28%; road improvements, 25%; bypass (on Green Belt), 23%; sustainable transport, 22%, traffic is not too bad, 2%. 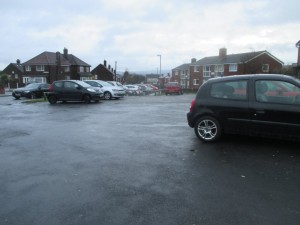 The campaign was featured in two articles and a reader’s letter in the Wigan Observer.

Standish Voice believes there is an urgent need to solve this problem but considers it is for the local authority to come up with the solution, hopefully in consultation with us and the wider Standish community.

We believe it is necessary to have a new, public car park in the centre of Standish, or a series of small ones. There should be funds available from the large house building programme in the village – from developers, through ‘106’ money, and the government, from the New Homes Bonus – to pay for this.

We note that two sites in Standish already have planning permission for car parking – both with associated retail development. These are the Chadwicks site, and a derelict site on Preston Road.

Standish Voice launched a petition on Wednesday, January 6, designed to run four weeks to raise awareness of the parking issue and collect individual responses to the problem.

An online petition (https://www.change.org/p/wigan-council-we-need-more-public-car-parking-in-standish) attracted 447 names, and individual comments are at the end of this report. 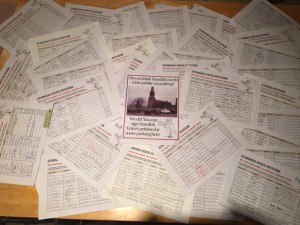 Shops, businesses and pubs also hosted paper petitions and a further 863 signatures were gathered, with individual comments attached to those names.

The comments reflect the strong sense of feeling about the issue with people believing the situation can only become worse with the large number of new homes expected in the village and the increasing amount of cars.

The campaign was also supported by Standish Community Forum.

Standish Voice has calculated how many public car parking spaces are needed to solve this issue.

We carried out a survey of current parking provision and then calculated the optimum amount of parking needed to give a true picture of the problem.

A quarter-mile distance has been used by a number of studies as a realistic and acceptable walking distance for people in urban settings.

Standish Voice wants to improve sustainable transport in the village, especially promoting walking and cycling, and we hope residents will travel from a much further distance to reach Standish centre in the future. However, over the last generation, the number of people living in Standish who are commuters by car has rapidly increased and as many households have access to vehicles, it is only realistic to assume that many residents will use cars to access Standish centre.

Also, Standish attracts people from outside the local area, either passing through the village or coming in to visit shops and businesses.

A quarter-mile radius also is a ‘common sense’ distance when envisaging the wider village centre, the extremities being The Beeches Hotel, on School Lane; Lidl on Preston Road; Grove Lane and St Wilfrid’s CE School on Rectory Lane.

Within a quarter-mile distance of Standish Crossroads, we counted the number of private and public parking bays, including separate bays for the disabled and parents with small children. We also included on-street parking which had time limited restrictions imposed by Wigan Council.

We excluded on-street parking without restrictions as this could reasonably be considered as parking mainly for residents.

In the public amount, we included 14 on Heaton Street, which were just outside the quarter-mile radius and seemed to be the sole use of residents, but believe these bays could be used by shoppers. Also, The Globe car park is a private car park but the owners allow the public to use it until 6pm at night.

Standish Voice then calculated the optimum amount of parking needed for Standish centre.

To do this we used the parking standards, currently promoted by Wigan Council in its initial draft Allocations And Development Management Local Plan (http://wigan-consult.limehouse.co.uk/portal/allocations_plan_initial_draft?pointId=s1441641898650).

This provides a minimum standard of parking spaces based on the various uses of premises and the square meterage of that property. 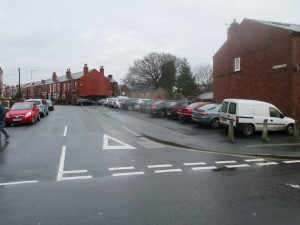 Wigan Council sees the benefit in using these parking standards and the Allocations Plan states: “These (benefits) include helping to promote the vitality and viability of town centres, attracting businesses to an area and reducing congestion. On-street parking is a particular issue in some parts of the borough, where it adds to congestion by hindering traffic movement and can present a potential danger for pedestrians, cyclists and other road users.”

We used national standards to find the required number of parking spaces needed for a GP practice and a dentist’s. This was four spaces per consulting room

We then applied a little ‘common sense’ and local knowledge where other uses were not stipulated.

In our calculations, we erred on the side of caution when calculating the ideal amount of parking.

We calculated that the suggested number of public parking spaces needed was 220, and 13 disabled bays.

Standish Voice believes it is vital to solve Standish’s parking problems once and for all.

New restrictions have made a bad situation more acute and future increases in population of the village will make this worse.

We believe our Neighbourhood Plan survey, the petition and the associated comments have correctly reflected the concern and highlights a problem which Wigan Council should address.

We believe our survey is a true, realistic and fair reflection of the parking situation in Standish.

It shows that there is a deficit of 120 general public parking spaces and nine disabled spaces in the centre of the village. 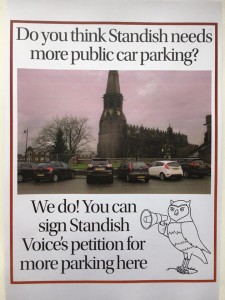 The relatively large number of private car parking spaces are not able to be used by the general public wishing to use with ease the many attractions of the centre of Standish and this is having a detrimental effect on shops and business. It is also frustrating for residents living near the centre of Standish and contributing to congestion, which is seen by many as a major problem in the village.

We believe Standish needs a new public car park in the centre of Standish and call on Wigan Council to explore this solution as a matter of urgency.

Thanks to the committee and working group of Standish Voice in the development of this report, especially Brian Jones and Ron Wade for work on the survey and Fran Aiken and Emma Appleton for help with the petition.

Also, thanks to the many shops and businesses which have hosted paper petitions, especially Philip Hawkins, of PMH Jewellery and Alan Price, of Alan Price Photography.

Special thanks to the hundreds of people who signed our petition and added comments.

Press articles and a letter, which was published in the Wigan Observer: 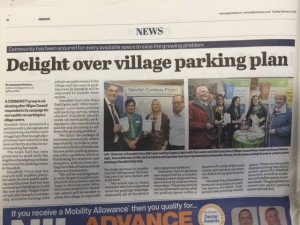 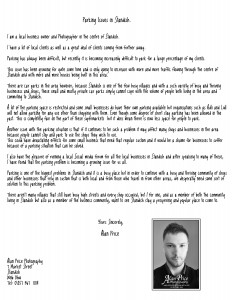 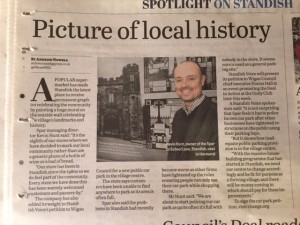 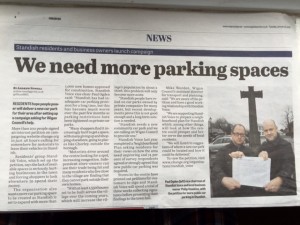