The people of Standish overwhelmingly agreed to adopt Standish Neighbourhood Plan after 94.5% of voters said Yes to it in a referendum held on Thursday, July 18.

Earlier in 2019, a Planning Examiner concluded her review of the Plan.

Her amendments were agreed by Standish Voice and Wigan Council and the Plan was voted on in a referendum of the whole village, held along local election lines.

In December, 2018, Wigan Council conducted the second round of statutory consultation on Standish Neighbourhood Plan. You can read the Final Plan here.

You can also read all the documentation associated with it and the submissions on it on the Council’s dedicated web pages. You can access this by clicking on the link here.

Standish Neighbourhood Plan is a comprehensive document designed to influence the village’s development until 2030. If it is adopted at referendum it will give our community a real say in changes across Standish.

This is the first non-business Neighbourhood Plan in the whole of Greater Manchester to reach this stage and Standish Voice would like to thank the community for its help in achieving this. 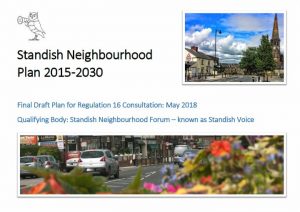 This Final Draft Plan was supported by a vote of members of Standish Voice at an EGM in May, 2018.

Further suggestions on wording and organisation of policies were given after an independent Examination ‘Health Check’, primarily carried out to see if the Final Draft Plan complied with national planning policy basic conditions. Further changes linked to these suggestions were carried out on the Final Draft Plan and its Evidence Base and appendices ahead of the next stage of consultation.

The Plan, its documentation and the consultation submissions has been studied by a Planning Examiner who recommended some changes. You can read her final report here.

If it is passed at a referendum, it will be adopted by Wigan Council. Neighbourhood Plans have legal weight and must be taken into consideration when bodies such as Wigan Council make planning decisions. We hope some of the proposals will also be used when Wigan Council decides how to spend developer and government funds which are expected to come to Standish due to the large number of homes that are being built across the village.

The Planning Examiner, Rosemary Kidd, made these remarks in her report on the plan: “The Plan has been prepared by the Neighbourhood Forum, Standish Voice. They are to be congratulated on the work they have undertaken in consulting the community of this large area and drawing up a plan to address the issues that have been identified particularly to ensure that the village centre and community facilities are enhanced and improved to meet the needs of this growing population.

“The Plan also seeks to ensure that the housing needs of the population are addressed especially for the ageing population and that provision is made for affordable homes.”

To use an interactive tool which explains the highlights of the plan, click here

Highlights of the draft plan include policies to:

Influence the amount of new housing

Control the number of hot food takeaways in the village centre

You can read the Final Plan for referendum here.

As part of the Neighbourhood Planning process, Standish Voice consulted widely with local people at all stages ahead of the Final Draft Plan’s preparation.

You can read the Consultation Statement here

You can read how the Final Draft Plan complies with basic planning conditions here.

Also, Standish Voice commissioned externally prepared reports – written by national consultancy Aecom – to help in the formulation of the original draft plan. These are in the Evidence Base’s Appendix B but you can also read these reports below:

You can read the original draft plan, which was was consulted upon for Regulation 14 consultation, here.

You can read the updated draft plan, which was changed after the Regulation 14 consultation here but before the Health Check changes here.

If you have any questions about Standish Neighbourhood Plan or its associated documents, please email standishneighbourhoodforum@gmail.com