The scheme, which would cost up to £1.6m, has been put forward as part of a number of infrastructure projects which would use money given to the local authority by the developers who are involved in the huge housebuilding programme across Standish.

The council says the scheme, which would see an extra lane for traffic doing towards the crossroad lights from Green Lane down to Quakers Place, will speed up traffic going through the crossroads.

But we think this will have a minimal effect and be hugely outweighed by negative impacts.

Please join the campaign by signing the petition against it.

You can sign it by clicking here, but you must register with the council.

A number of Standish shops and businesses also have printed copies which you can sign.

We are against the road widening scheme, which is pictured in a council plan here, because it:

• Will increase the amount of traffic using Standish as a cut through to other areas, including Wigan and the M61
• Will bring more housebuilding development to Standish due to an increase in capacity at the crossroads
• Removes green areas and trees and has a hugely detrimental impact on residents living on the road
• Worsens emissions in the centre of Standish where the problem of exhaust pollution is over the legal limit and one of the worst in the borough
• Increases health and safety dangers to pedestrians, including children walking school
• Ruins the character of Standish at that entrance to the village
• Will only have minimal impact on congestion for a large amount of money (up to £1.6m), which could be better spent on other projects in Standish
• Reduces parking provision by taking away spaces
• Will hinder the progress of emergency vehicles when there are three lanes of standing traffic
• Perpetuates the image of Standish as a congested village centre, which damages trade and its reputation as a good place to live in

We will be building the campaign over the coming weeks to try to persuade the council that the money which would be used for it should be used to improve the centre of Standish to make it a more pleasant place to shop and work in, including better pavements, street furniture and other enhancements to the Conservation Area.

We have seen unprecedented opposition to the scheme and hope this is reflected in the council’s recent, flawed consultation scheme, which it was part of.

You can read a press article about it, including a statement from Standish Voice, by clicking here.

In early June, a letter from Standish Voice was published in the Wigan Observer highlighting that all four candidates in the recent local election were against the proposals. You can read that letter here.

You can see a plan of the proposals below: 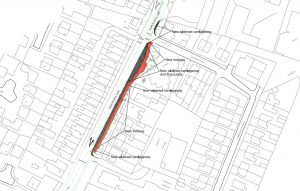